One of the many enthusiastic and selfless supporters of The Mercy Hospital for Women Neonatal Intensive Care Unit (NICU) continues to seek opportunities to thank the staff who helped save her baby boy’s life four years ago.

Maddie Francis founded NICU Cheer, an organisation that collects donated gifts from corporate  Australia to share among families whose babies are in NICU at Christmas time. The initiative has become so popular, she has decided to expand it to include Mother’s Day and Father’s Day as well.

Maddie’s son Ashton was born at 30 weeks’ gestation in 2016 — 10 weeks early — requiring six-and-a-half weeks in NICU. While Ashton is now a happy child, he still requires regular visits to hospital and specialists to cope with ongoing fatigue and developmental issues.

Maddie’s bond with NICU is important and personal — her attitude is that she must keep giving back.

Maddie admires all the NICU staff but a particular hero is Mercy Health Neonatal Paediatrician and Mercy Health Breastmilk Bank Head of Unit Dr Gillian Opie, who, she says, “is a huge reason why we initiated NICU Cheer”.

“Without Dr Gillian, we wouldn’t have Ashton — she’s our greatest supporter. We couldn’t love her any more,” Maddie says. 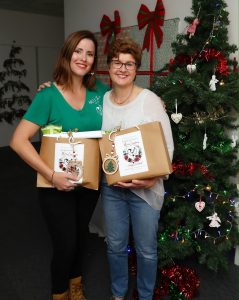 Like many mothers whose babies spend a worrying and tense period in NICU, Maddie’s bond with the unit and its staff is important and personal. Her attitude is that she must keep giving back.

That bond motivated her to start NICU Cheer three years ago.

Since then, Maddie has recruited a group of like-minded NICU mums to support the initiative, mainly via the NICU Cheer Instagram account.

Many of these volunteers were on hand in mid-December to prepare gift bags for easy distribution to families with babies currently in NICU.

One of Maddie’s friends is artist Khatija Possum, whose son John Shannon Possum was born at 23 weeks’ gestation. Like Ashton, “Possum” beat the odds during his 15-week stay in NICU.

“John, whom we all called ‘Possum’, and Ashton were neighbours in NICU and Khatija generously donated her painting ‘Great Grandmother’s Country’ for use on our NICU Christmas cards,” Maddie says.

Christmas 2019 was also the first time that Maddie expanded the distribution of her gift bags to families in NICUs at the Royal Women’s Hospital and Monash Children’s Hospital.

Altogether, 188 NICU parents have been beneficiaries of Maddie’s generosity. The Mercy Hospital for Women NICU staff working on Christmas Day were not forgotten either, with a hamper of treats delivered for them to enjoy. 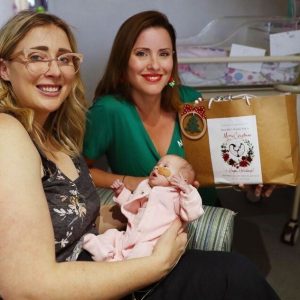 Maddie pictured with another NICU mother Lauren, holding one of her identical twins, Layla.

Before becoming a mother, Maddie worked as a lawyer, but with Lily, her five-year-old daughter, and Ashton, who requires ongoing additional care and appointments, she has not yet returned to her work. Instead, she pours as much of her energy as possible into NICU Cheer.

Her hard work is paying off and word is spreading. Donations to NICU Cheer have come from as far afield as Italy, the United States, New Zealand and from all around Australia. For their generosity, and the goodwill that the gifts generate, Maddie could not be happier.

The Safer Baby Collaborative is a program that has been developed to educate families-to-be about the simple steps they can take to reduce the likelihood of stillbirth.

Day respite provides a break for all

Mercy Health's Day Respite Program not only provides respite for clients, it also allows some much-needed rest and free time for carers.

Join Mercy Health as we celebrate 100 years of bringing God's mercy to those in need.