Mercy Hospital for Women in Heidelberg is pioneering a practice that allows new mothers to watch and bond with their babies in the first few minutes after a caesarean delivery.

The introduction of a BabyCam into operating theatres means new mothers having an uncomplicated caesarean birth, do not miss out on the precious first moments after the birth of their baby, including watching their baby’s umbilical cord being cut and putting on their baby’s first nappy.

Before BabyCam, a new mother delivering via caesarean section would see her newborn straight after delivery before they were taken away out of view for post-birth checks. With Mercy Hospital for Women’s newly-improved BabyCam, mothers do not miss a beat, with a video camera and television screen hardwired into the theatre’s equipment, allowing a mum to watch her baby’s every move.

“BabyCam dramatically changes those first minutes of parenthood, and it is hugely reassuring for many families,” says Hana. “BabyCam keeps mothers calm and lets them focus on their baby rather than what’s going on around the operating room. It is our belief that this visual connection with their baby improves bonding, which impacts directly on breastfeeding success.

“It has given caesarean parents the same privilege afforded to those who experience natural birth — the opportunity to participate in, to see, and to bond with their baby from its very first breath.”

New mum Emma Burton delivered her first two children via caesarean section without the use of BabyCam. Emma remembers lying on the operating table with no view of her babies immediately following their birth. However, when she delivered her son Darcy at Mercy Hospital for Women this week, BabyCam changed the entire birthing experience.

“It was really comforting to have BabyCam,” Emma explains. “I watched everything and felt very connected with Darcy and what was happening. It was wonderful.” 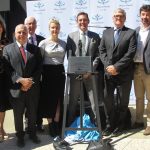 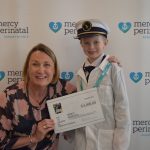 A six-year-old Melbourne schoolboy has raised $8,000 for stillbirth research through the sale of pasta necklaces.