Christmas came early for the tiniest patients at Mercy Hospital for Women in Heidelberg on Monday 18 December, when Santa made a special visit to the Neonatal Intensive Care Unit (NICU) and Special Care Nursery (SCN).

The babies’ special moments with Santa were captured by professional photographer, Stephanie Brebner, who is donating the keepsake photographs to the families. Stephanie’s husband, Dean, dressed up as Santa and stood next to the baby’s crib or next to the parents cuddling their baby for the photographs.

This is the second year the husband and wife team has brought Christmas cheer to sick and premature babies and their families at the hospital. The Brebners were inspired by their own experience after their daughter, Abigail, was born at just 28 weeks in 2015 and had to spend Christmas at Mercy Hospital for Women.

The Brebners have formed Hope Photography Victoria with their mission to give back to the community across Victoria who supported their family during the arrival of Abigail.

“We know how tough it is for families to spend the holidays in hospital, and we want to give them something special to remember their baby’s first Christmas,” says Stephanie.

Mercy Hospital for Women cares for approximately 1400 sick and premature babies each year.

“We care for up to 61 babies in our NICU and SCN at any one time, and many of our current babies are expected to remain in the hospital for Christmas,” says Theresa Arnold, Nurse Unit Manager of NICU, Mercy Hospital for Women.

“We’re glad to be able to help bring a smile to the faces of parents and siblings as this can be a particularly stressful time for them.” 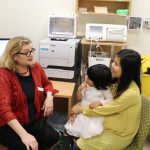 In an Australian first, Werribee Mercy Hospital has introduced an obstetric triage tool for the emergency care of pregnant and postpartum women. 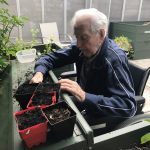 Mercy Place Montrose creates a garden for everyone

Green-thumbed residents at Mercy Place Montrose had a fresh start to the New Year thanks to the establishment of wheelchair accessible planters.

Read more Mercy Place Montrose creates a garden for everyone