Ninety-year-old Malcolm Dyer may be legally blind, but he is living proof that you are never too old to have new adventures.

The Mercy Place Mandurah resident recently packed his bags and set off up north on his first holiday for five years with his son Cliff, after the pair decided that not only did they want a break in the sun, but they also wanted to support the Western Australia economy.

“It has been fantastic to enjoy a long overdue holiday,” says Malcolm, who also travelled to Derby and Cape Leveque during his trip.

“My son and I had a great time, we really enjoyed all the sunshine and Broome was beautiful. It’s been modernised since I was last there but has kept much of its stunning architecture.  Now I’m just starting to plan the next holiday – you know what they say, it’s all about having a wander out yonder.”

“We all know that a holiday can be a great way to relax, recharge the batteries and have fun, and age doesn’t have to be a barrier to having a holiday, even when you live in aged care and there may be a bit of extra planning,” Christina said.

“We were very happy to support Malcolm to take a break with his son and we’re absolutely delighted they’ve had such a great time. Until their trip to Broome, they hadn’t been on holiday together for decades, and it has been lovely to hear the many happy memories they’ve made as a result of the trip.”

The ‘intentionally cheeky’ “Do it in WA” campaign was launched in March and urges West Australians to travel locally while the WA State boarders are closed.

In Western Australia, the organisation cares for more than 300 people across six residential aged care homes, with an additional 78 retirement living units. 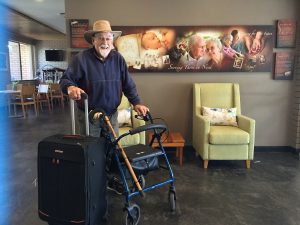